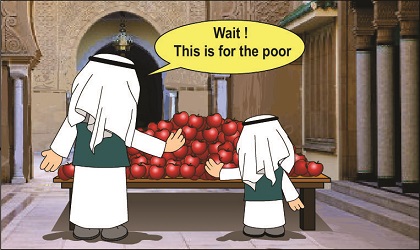 Hazrat Umar bin Abdul Aziz (R.A) was a renowned caliph. He considered government treasury as a public trust and guarded it with great honesty. One day many apples were received in government treasury. As per rule he started distributing them among Muslims. Just then his own young child happened to come there. He was too young and innocent to understand as to whose apples they were. He saw his father distributing them and thought they belonged to them only. He picked up one apple and started eating it.

The apples belonged to the government treasury over which every Muslim had a right. How could the caliph permit his own child to take it? It would have amounted to misappropriation. He, therefore, snatched the apple from the child. The child started crying. He tried to console the child but he went away crying and complained to his mother about it. The mother consolingly, wiped his tears and got an apple from the market and gave it to the child. When the caliph entered the house he smelt the fragrance of the apple. He inquired from his wife if there was any apple that belonged to the government by any chance.

The wife replied.” It is not government’s apple. I have bought it from the market and gave our child to eat. You had taken away the apple from him and he had come to me crying. I had to get one from the market to silence him and cheer him up”.

The caliph replied”. What could I do, my dear?” The apples belonged to the government that is why I had snatched it from the child lest I should be reckoned by Allah as a faithless and dishonest person just for the sake of one apple.

This reply of the caliph silenced his wife.