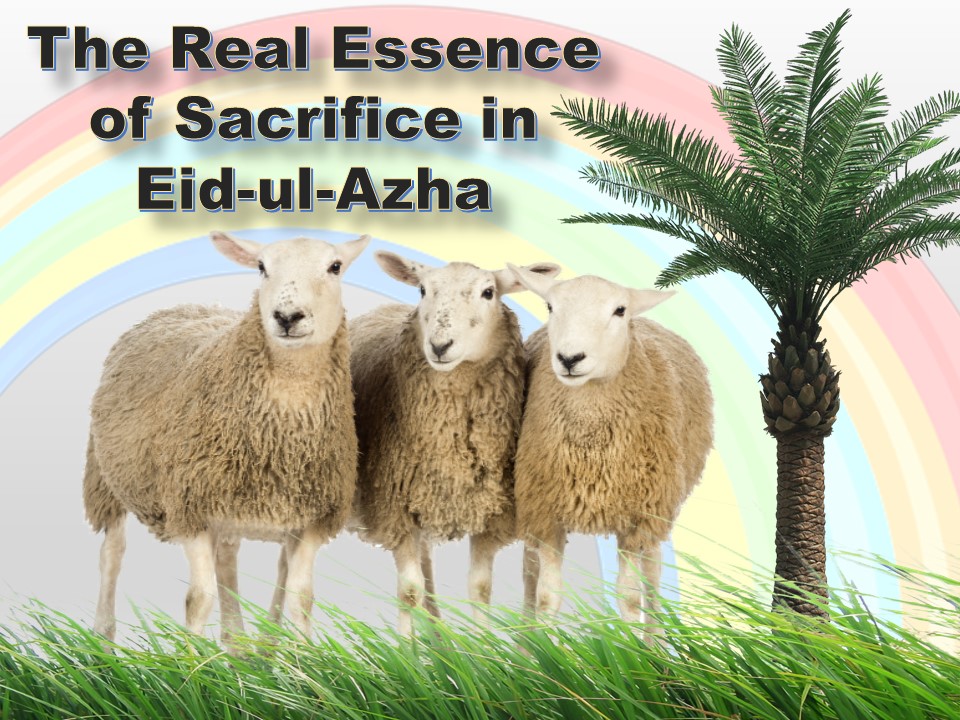 Of the two holy days offered to Muslims by Allah (swt), one that is the day of Bakra Eid/ Eid-ul-Azha is arriving soon. On such an auspicious occasion, it is an obligation on Muslims to offer sacrifice. The sacrifice of an animal in the name and for the sake of Allah. There comes a question in my mind, but what is sacrifice? Sacrifice in its true sense is an act of worship in the way of Sunnah.

And if we deeply introspect our way of sacrifices, we will realize that we don’t perform a sacrifice, we enact on a ritual. Thus, does this kind of sacrifice gain us any ajr (reward) from Allah? Verily not. What makes us a Muslim is that we don’t just perform a ritual and celebrate the festival, but we worship and sacrifice. It is of no surprise to us, we already know, and we ourselves remain engaged in the market for shopping and so on, especially on the night before the Eid. While the same night is among the five significant and holy nights, of which it is said that if anyone stands in worship in front of Allah, to please Him and seek rewards, paradise becomes obligatory (wajib) on him.

It comes in the traditions that the Last Prophet [peace be upon him] said: “Whoever stands up (in worship) in the nights preceding the two Eids expecting rewards from his Lord, his heart will not die when the other hearts will die.” [Ibn Majah]

Remember, the night before the Eid and also the day of Eid is the time for worship. It is also of no astonishment, we tend to spend more on clothing and shopping even on the occasions of Eid, instead of spending on charity and sacrifice. This also comes in one of the hadith, the most desired wealth in front of Him is that which is spent on sacrifice. Admittedly, it is an indication of our low or feeble Imaan, lack of purview on the rewards that have been promised by Allah that has formed our priorities in such a way. It is compulsory for every Muslim, to gain understanding about every deed that you do or wish to do and rewards that have been promised for it by Allah (swt) on the performance of that deed, acquiring that knowledge and belief will eventually cause progress in your acts and makes you closer to Allah (swt).

Imagine, what it meant as a sacrifice in the scenario of prophet Ibrahim (as), to sacrifice his own beloved son. And what Allah has rewarded him with. That makes the spirit of sacrifice alive in front of us. And what do we do? We on a day before or just the night before the Eid go to the market, haggle with the sellers for the prices, get them home and perform the ritual of Eid-ul-Azha. Wherein the true spirit of sacrifice would be to sacrifice the heart, our love over the love of Allah. To get the sacrificial animal, way before the day of Eid, develop attachment and love between the animal and us, so that when we sacrifice it, we must feel. When we hold a feeble sort of faith in the promises of Allah, only then worship would become a burden to us. Let us sacrifice from hearts, obsequiously and with a heart.

Prophet Muhammad [peace be upon him] once said: “That whosoever is capable of performing Qurbani but he does not perform, then such a person should not come close to my Eidgah [place where the Eid Salah is offered].” [Ibn-e-Mjah 2123], [Ahmad 8273].

The true meaning of Qurbani/sacrifice would be, to perform a deed, intended to please and get nearer to Allah, in the way He likes, and if in any way otherwise would not account as worship.

Hazrat Umar [ra] used to say: “Without belief in the rewards that Allah has promised us on the performance of good deeds, there is no reward”. And in our contemporary Muslim world, we spend lavishly on marriages, clothing and all sorts of desires. Perhaps, all of which will only further take us away from Allah. But people don’t have faith in these things.

Occasions of Eid are but opportunities bestowed upon us by the mercy of Allah to do ibaadah and earn His rewards. Unfortunately, we are found in markets, instead of in a state of ibaadah. And it is commanded that people decorate their day of Eid, by proclaiming the greatness of Allah.

Last Prophet [peace be upon him] told Hazrath Fathima [daughter of the Prophet, May Allah be pleased with her]: “O Fathima! Stand up towards your qurbani and give your qurbani yourself because even before the blood of the sacrificial animal falls to the ground, all your past sins will be forgiven”. The Sahabah [ra] asked “Is this superiority [of a reward for each and every single hair on the body of the sacrificial animal] exclusively to you, your family and us or for everyone?”, The Prophet [peace be upon him replied] “No! This reward is for each and every single Muslim.” “Who all? Each and every single Muslim” [Attargheeb wattarheeb 2/103]. And then the Prophet [peace be upon him] said: “O Fathima!, On the day of Judgment, the meat of the sacrificial animal will be weighed on your scales and Allah will increase its weight on to 70 times its original!!” and 70 here means countless. Yes, 70 times! So if you want Allah to increase that reward and if you want more and more of that, then here in this world, buy a weighty sacrificial animal, not a frail, weak animal which looks as if it is about to die.
Give sacrifice with happiness, fondness and with all your heart. Only if the person has some love for the sacrificial animal, it would then amount to sacrifice.

“You shall never attain righteousness unless you spend from what you love.”
[3:92]

It also gives us an abstruse and very profound message that no love must subdue the love of Allah in our hearts. The wisdom behind this act of worship is a brilliant design with a subtle message that our heart owes to Allah and Allah alone, none but other than Him. Whosoever or whatsoever else comes between the Creator and the created, or any desire or passion burgeon more in our heart then it is to be sacrificed for the sake of love of Allah. It was evident from the love of Prophet Ibraheem (as) for Allah, that on His command, he readily agreed upon the test of sacrificing his own beloved son Ismaeel (as). On the day of Eid-ul-Azha, we perform the sacrifice of an animal, to remark his [Ibraheem’s (as)] noble and remarkable act of sacrificing our love over the love of Allah. Though the law is to perform the sacrifice of an animal, but the insightful message is to surrender our hearts, only then will it become worship, or else its nothing more than a ritual. Our heart belongs to Allah alone, and Allah loves such sacrifices.
Its reported from Hazrath Ayesha [may Allah be pleased with her] that the Prophet Muhammad [peace be upon him] said: “The most desired deed that Allah loves is qurbani, flowing of blood through the deed of sacrifice, there is no other deed more desired deed than this for Allah” [Tirmidhi 1493]. And on the Day of Judgment, this same sacrificial animal with its horns, its hairs, etc will appear before us in the same way it was sacrificed. So, Allah has promised rewards over this.

The simple synthesis of this article:

May Allah forgive us, elate us in the purview of our deeds, let our intentions set right and accept our sacrifice as a worship. Aameen.

To slaughter a camel or a sheep,
Is to make a heart weep,
Rip the love of all and dip the love of God deep,
If this, is not the true essence of a sacrifice,
Tell me, then what is?