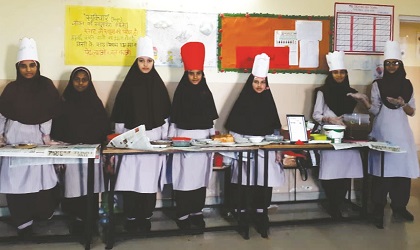 Hyderabad: MSians organized a sumptuous food fest at the Muradnagar branch in the month of August. The senior girls of four houses participated in the fest and showcased their cooking skills. The four food pavilion represented by team members of four houses presented four different genres of cuisine at the fest. 1) Motivators prepared Hyderabadi Zaiqa, 2) Inspirers made drinks and juices, 3) Leaders presented cakes and bakes and 4) Challengers prepared chowpathi chat.

The dishes presented had an incredible impact on the audience. Hyderabadi Zaiqa pavilion had mouthwatering dishes like biryani, tea with snacks, spicy haleem and much more. The cakes and bakes pavilion had a yummy taste with the items like sandwiches, cakes, pastries, puffs. The Juices prepared by Inspirers had a refreshing taste of the variety of juices like cocktail fruit juice, fruit milkshakes and also the tangy flavours enriching taste buds. And one of the most yummy, hot flavours were found in the chowpathi chat flourished with panipuri, alootikki, paubhaji, cholepuri….. and much more.

All the flavours of all the items created an immense effect of ever lasting memories of the participants. The presenters had also earned a lot of profit. The cakes and bakes emerged as the highest profit making group, followed by chaupati chat then by drinks and juices and by hyderabadi zaiqa. There was somewhat loss in biryani, haleem… There was a big crowd of students eagerly waiting to taste the cuisine while they were being prepared. Even all the teachers enjoyed it with lots of joy and fun.

“One of the most valuable lesson which we learned in this food fest is about the marketing, sales, profit and loss which was a learning process for all of us”, said one of the participants of the fest. “In my perception, it was indeed a fabulous event under the care of the most enthusiastic and dynamic person -our class teacher Ms Sumaiyya madam”.