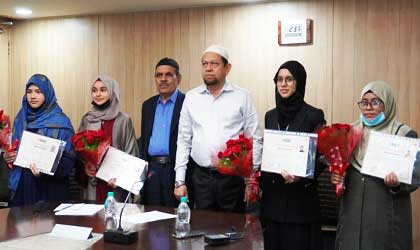 They are only four representing Telangana in international platform

They are the fortunate students who have become a part of this influential world body. They are students of class X of MS Creative School, said the senior director. “They have been selected after a rigorous selection process spread into three stages. The final result was declared on the 21st of this month”. These students have also received various curricular and extracurricular awards and prizes. The Blubworld, that empowers teens by getting them onstage at the world’s most important forums, invited application for this prestigious position. 72,000 applicants participated at this competition which held in three rounds and finally 100 students were elected. The elected MPs will mentored and trained in life skills, problem solving, policy making, global governance and voting as a skill.

Sumera Ummey Kulsum while proposing a suggestion on “How to make life better” said, “To change the world we need to first change ourselves from inside. Only then we can bring changes in the world.” She suggested to tune oneself in such a way that the outside world cannot affect you. Your personal development can be enough to bring this development.

MS Education Academy that is a result producing institution works for the holistic development of students. It is a preferred destination for the minority students as it provides quality education with all round development. The institution not only imparts education but also inculcate life skills need to be a global citizen. That is way the MS logo has tagline “Preparing World Worthy Individuals. The above elected students also excel in curricular and extracurricular activities and have won awards and prizes.